This course covers the use of forensic and DNA Evidence in both the international courts and doemstic jurisdictions. Topics covered include: fingers prints, ballistics, exhumations and autopsies. 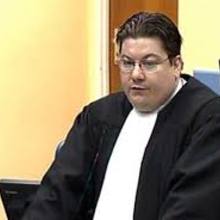 Dragan Ivetić received a bachelor’s degree in philosophy from Northwestern University in 1996 and went on to the University of Illinois College of Law where he received a J.D. in 1999.

After graduation he practiced as an Associate Attorney at McBreen & Kopko, a multi-state general practice law firm based in Chicago. His practice at that firm included working on cases before the ICTY, as well as serving as outside counsel for General Motors Corporation, and representing both individuals and companies before Illinois Courts such as Dejana Industries, Butler International, Health South Inc., and ATLD, Inc. He continued his career as a Member Attorney of Ostojic and Scudder LLC, a Chicago based law firm that worked in association with lawyers from Belgrade, which handled cases from around the world on topics that ranged from criminal law to insurance law and tort law. Mr. Ivetić is now a solo-practitioner, who since 2006 has practiced exclusively before the ICTY and the State Court of Bosnia-Herzegovina. Mr. Ivetić has been involved in cases at the International Criminal Tribunal for the former Yugoslavia since 1998. He is currently the Legal Consultant to Ratko Mladić in the ICTY case Prosecutor vs. Ratko Mladić (IT-09-92). Further Dragan Ivetić has been a Co-Counsel for Dušan Fuštar in Prosecutor vs. Mejakić, et. al. (IT-02-65), Sreten Lukić in Prosecutor vs. Milutinović, et. al. (IT-05-87) and for Milan Lukić in Prosecutor vs. Milan Lukić and Sredoje Lukić (IT-98-32/1), at the ICTY. Mr. Ivetić has also been Vice-President of the ADC-ICTY on several occasions, for a total of 4 terms. He currently is a member of the ADC Training Committee, the ADC Disciplinary Council, and the Amicus Committee. He previously served on the Membership Committee for several terms.

In addition to his job duties as an attorney, Mr. Ivetic last year presented a lecture at Erasmus University, Rotterdam, as part of the "Law and Practice" course program offered by the Department of International and EU Law, under Professor dr. Kristin Henrard. He regularly lectures visiting students and professionals at the ICTY, and for the last 3 years has been one of the instructors of the ADC-ICLB "Mock Trial" program.